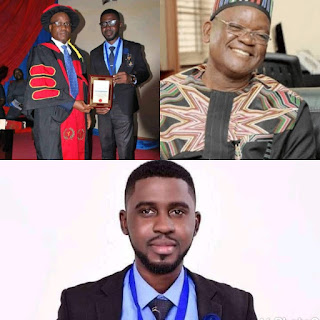 Governor Samuel Ortom congratulates Andrew Wueseter Ijever, who graduated from the Department of Radiography, Faculty of Allied Medical Sciences, as the overall best graduating student at the University of Calabar’s 34th Convocation.

Mr Ijever has made the government and people of Benue State proud, according to the Governor, and his academic excellence would serve as a source of inspiration.

He encourages the young academic to see his win as a sign of bigger things to come in his career.

Governor Ortom encourages other Benue sons and daughters studying at home and abroad to pursue Andrew Ijever’s example of devotion and hard work in order to achieve their goals.