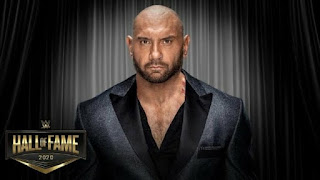 Batista is no longer scheduled to be inducted into the WWE Hall of Fame this year.

His induction page currently reads “access denied” after WWE.com removed him from the class. Batista’s WWE.com profile also lacks the “Hall of Fame” logo found on the roster pages of other WWE Hall of Famers.

According to Benuepost Nigeria Reports, Batista will not be present at this year’s ceremony. Batista will be inducted into the Hall of Fame “when a full crowd can enjoy it,” according to Fightful Select.

Despite WrestleMania airing in front of a live audience, the 2021 WWE Hall of Fame ceremony has been confirmed to take place from the virtual WWE ThunderDome this year.

WWE is allegedly planning to tape the ceremony on March 30 and April 1 this year, with the ceremony airing one week later on April 6 on the WWE Network.

Eric Bischoff, Molly Holly, the Bella Twins, JBL, Jushin “Thunder” Liger, the British Bulldog, and the nWo will be among the inductees from both the 2020 and 2021 classes at the 2021 ceremony.