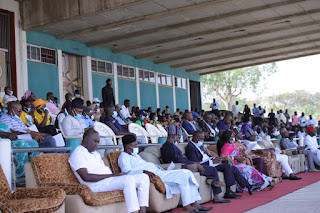 Benue State Governor, Samuel Ortom has affirmed his commitment of his administration to strengthen healthcare delivery in the state by empowering and also improving the Benue State Primary Health Care Board, “perform it’s roles and effectively promote better health outcomes.”

Similarly, the Governor has instructed all local government chairmen in the state to ensure adequate support for the immunisation campaign in their various council areas and wards.

Governor Ortom made this known on Monday, November 23, at the flag off of this year’s Mass Yellow Fever Vaccination campaign in the state at the IBB Square Makurdi, Benue State.

To this end, he said the state government has released its share of the counterpart funds to the primary health care agency to get rid of the Yellow Fever in the state.

The Governor also directed the State Task Force on Immunisation headed by the Deputy Governor,  Engr Benson Abounu to shore up its immunisation coverage of the state, saying that government would give maximum attention to traditional leaders who he said are the custodians of the programme to see that the people are immunized in their domains.

While applauding frontline workers in the health sector for their commitment to eliminate other targeted diseases including Covid-19, Governor Ortom also called on stakeholders and other partners to join the state government to achieve quality campaigns to eradicate the dreaded disease.

Commissioner for Health and Human Services, Dr Godwin Oyiwona in his response stated that the current vaccination which is to last for ten days in the state targets 4.7 million according to the World Health Organisation guidelines for the implementation of the mass campaigns in the context of Covid-19 pandemic.

A keynote address by the Executive Secretary of the Primary Health Care Board, Dr Bem Ageda, commended the state Governor for the huge resources he has committed to ensuring the full operations of the agency to deliver on its core mandate.

Dr Ageda announced that the board had recruited about 1,586 vaccination teams to cover four million people in 243 wards in the state.