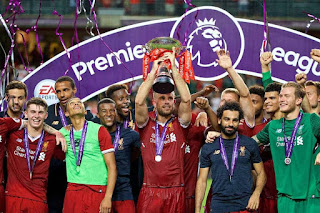 The Premier league giants, who’s impact in the last two seasons had been praised all over the world with their style of play and  work rate, won their last premier league title in the 1989-1990 season.

The Reds’ first league title since 1989-1990, was confirmed yesterday Thursday June 25, 2020, after Manchester City lost 2-1 to Chelsea at the Stamford Bridge, in a dramatic twist of fate.

With 23 points gap at the top of the EPL table, it is the largest held by a champion in English top-flight history, the last time a team came close was in the 2017-2018 season when Manchester City emerged champions with five games left to play.
The Champions may even set more records from the remaining 7 games.